From Misery to Happiness 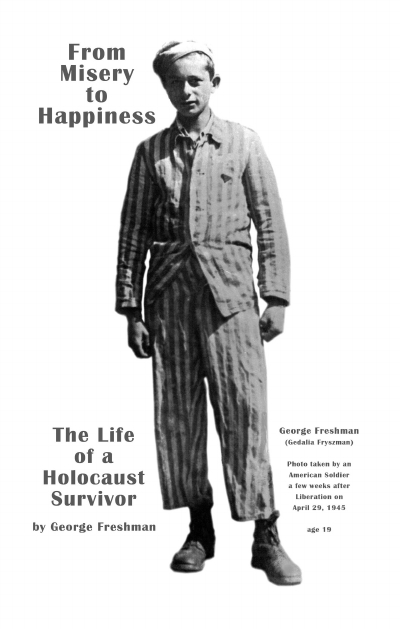 At thirteen years of age, George Freshman faces the horrors of the Nazis Regime in 1939 when Germany invades Poland. Along with other Jews, his family is taken from their home and forced to live in crowded ghettos and concentration camps under abusive and uncertain living conditions. In all these places, George was abused, forced to work, starved, and exposed to severe cold weather wearing only the same shabby uniform. He watches friends being hung and executed. Never does he see a sign of pity from any of the Nazis he observes. They show arrogance and hatred against him and others for only one reason: that of them being Jewish.

At one point, George is taken from his mother, who refuses to let him go. The soldiers hit her over the head and push George into a truck. He watches his mother and sister crying, saying “Please, don’t cry. I’m coming back.” He carries with him a positive attitude and belief that he will be back home. This gives him emotional support through the pain and suffering.

During five years of the war, George lives in a total of nine different ghettos and concentration camps, the last one being Dachau, where he is sent for extermination. By the time he is liberated by the American Army in 1945, he is sick with tuberculosis and nearly dying from starvation to a point that he can hardly stand up. Still, in all of this, he maintains the thought that one day he will be free and happy.

Even after liberation, George continues on a journey of hardship and struggle, recuperating from his illness, looking for his family, making a new life for himself with unforeseen challenges. His story is filled with pain and joy, sorrow and fulfillment as he reveals how his optimism and hope for the future brings about the happiness that he always believed would be his.