In the Beginning: Project Genesis 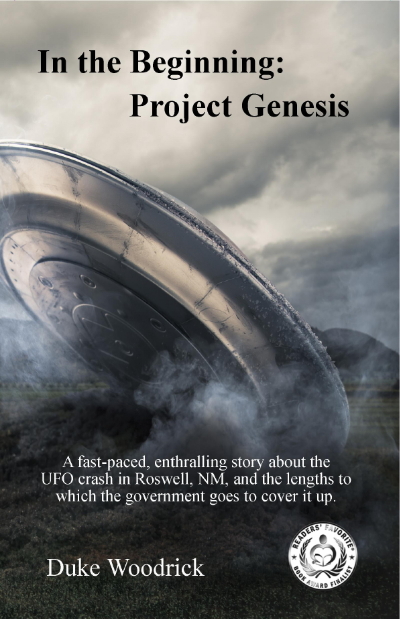 If you like conspiracy theories, you’ll love this book. True facts mingled with real and fictional characters, this story will keep you reading into the wee hours of the morning.

A blinding flash streaks across the sky and comes to rest at the base of Pleasant Valley Ridge. People who see the fireball rush to see what it is. They consider themselves lucky to be the first humans to see a crashed spaceship and its other worldly occupants.

The government gets involved and, right away, people start dying. Even the members of Simon Cole’s boy scout troop aren’t trustworthy enough to warrant keeping alive. Lucky for Simon, he takes a bathroom break and watches from a distance as men in black uniforms swoop in and take control of everyone and everything.

In 1967, Marylyn Monroe finds pictures of the crashed spaceship in Bobby Kennedy’s briefcase. She takes two pictures and hides them. Little does she know that whenever someone gets too close to discovering the truth about Project Genesis, the powers-that-be send out a special team. No matter what it takes, the truth will be safe once again.

Now known as the UFO Senator, Simon Cole has spent his adult life investigating UFO sightings, paying particular attention to anything to do with Roswell. The more involved he gets, the more he discovers the crashed spaceship isn’t all the government is trying to hide. He unwittingly uncovers a plot so sinister it makes him question the sanity, and morals, of the government he works for.

From Santa Fe, NM, to Madison, MS, to Area 51 in Nevada, Senator Cole and his crew of misfits uncover the deadly truth, but can they stop it in time to save mankind?

Title: In the Beginning: Project Genesis

Duke Woodrick was born in Santa Monica, California, in 1945. He grew up in Venice and now lives in Henderson, Nevada, with his wife, Marjorie. In the Beginning: Project Genesis is his first published novel.