It's Better to be Lucky AND Good 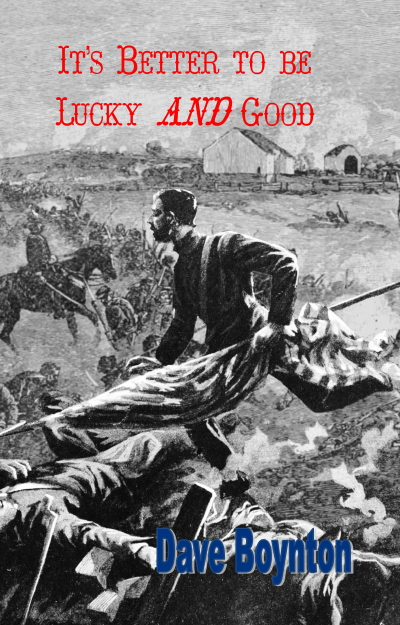 Gabe Johnson’s father is murdered. The Law won’t do anything about it. Gabe privately gets even with the killers in his own way. When the Law comes looking for him, he joins the Union Army.

Gabe’s skill and common sense play a big role in keeping him alive until he gets discharged. His luck gets him through a lot of the dangerous situations he finds himself in.

Anxious to get away from the fighting after being discharged, Gabe heads west. There he finds a rancher in trouble. After meeting the rancher’s children, especially his beautiful daughter, Gabe decides to stay and help them fight a greedy land baron who ruthlessly kills land owners and steals their property.

Title: It’s Better to be Lucky AND Good

David Boynton was born in New Hampshire, remaining a New Hampshire native his whole life. Raised in the small town of Ashland, he spent his early years reading westerns and watching all the old cowboy stars of the 50’s and 60’s on tv and at the movies. After graduating from Ashland High School in 1971, he enlisted in the US Navy, spending eight-and-a-half years traveling around the world. On his first ship, he was stationed in Italy, giving him the opportunity to travel all over Europe. The next ship took him from California to Hong Kong, Singapore, the Philippines, Thailand, and Australia. On his final tour, he was placed on an aircraft carrier. Once again, he headed back to the Mediterranean, visiting Spain, Italy, Greece, Turkey, and Egypt before passing through the Suez Canal to patrol the Pacific Ocean.

Throughout all the traveling, he continued to read anything with a western theme he could get his hands on. In the back of his mind, he kept the thought that he could write a story that was better than some of the books he had read. He also read many other books, but preferred western history or fiction.

After getting married in 1981, going to work for the Postal Service in 1984, and raising two boys, the idea of writing a book took a backseat. Things got even busier as the boys got older. He started coaching cross-country and track at the middle school the boys attended. He also started running himself, running between 30 and 50 miles a week. The whole family ran races almost every weekend, most of the summer. He has run many 5k’s, 10k’s, a number of half-marathons, and one marathon.

Finally, after the boys had grown to the point of being independent enough to have a job and a car, he found more spare time and began thinking about writing this book.

He has been married to the love of his life, Sherry, for 38 years. They lived in New Hampton, NH, for 32 years, then moved one town over to Bridgewater, NH. David and Sherry winter in Lake Havasu City, AZ, enjoying the warmer weather and the western culture. They have two sons and six grandchildren.