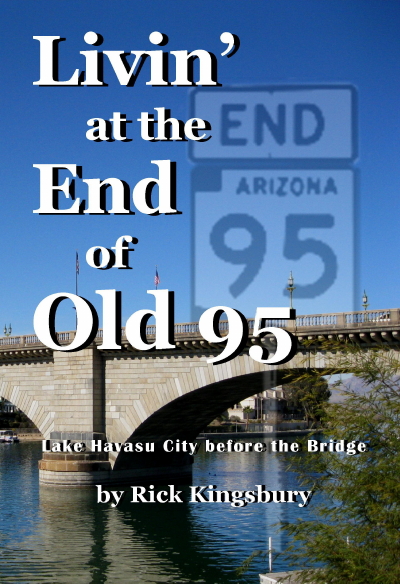 What did a thirteen-year-old boy think of Lake Havasu City when he first arrived in 1965? BORING! Why Rick Kingsbury’s parents dragged him, his brother, and his sister to a town with less than 800 people, he had no idea. Living in a thirty-foot camp trailer with no running water and no electricity for the first year was no fun; neither was attending school with fifty students that year.

Join Rick as he watches the town struggle and grow, adding new businesses, homes, and families faster than he can imagine. Through good times and bad, Rick comes to realize the early residents are as hardy as the pioneers who came across the plains in wagons a hundred years earlier. As he struggles to find his identity in a town as unique and different as each of its residents, not only will Rick’s stories make you laugh, they’ll take you back to your own youth.

Rick Kingsbury is a third-generation Arizonan, born in Phoenix and raised in Glendale, Avondale, and Lake Havasu City. He has shown off his home state as a tour guide out of Phoenix and worked for the state in Florence. He is now retired and living in Lake Havasu City again.