The Night He Died 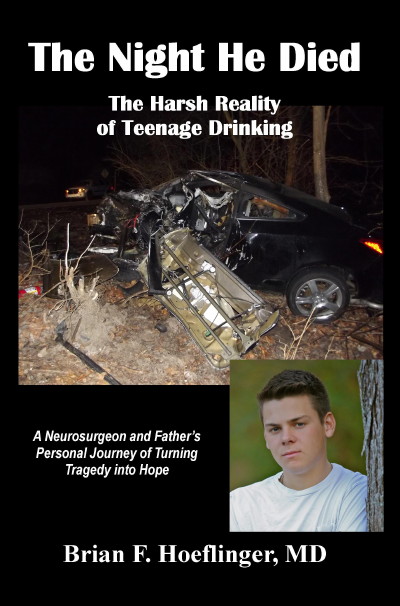 Two words with such opposite meaning and which inflict such contradictory emotions and yet are so closely intertwined in our lives.

As parents, we bring meaning and life into this world through our children. Our lives become defined as a result. We learn the joy, hardship, and responsibility of shaping an innocent life. But a day will come when that life will be taken. For some, death will come too soon.

Thus is the story of my son, Brian Nicholas Hoeflinger, who died unexpectedly at age 18. Brian was drinking alcohol the night he died and drove drunk. His car struck a tree and his life was ended. Nothing about Brian’s life suggested that he would meet this kind of untimely end. He was a gifted student and accomplished athlete. He was always generous with his time and words of encouragement to anyone who needed help. He was a good boy who made a mistake, and that one mistake cost him his life.

That is the harsh reality of teenage drinking. I’ll never forget the image of my son lying there dead on a cold gurney in Trauma room 24 at Toledo Hospital, a room that I have been in so many times before as a neurosurgeon but never as a father. His lifeless body lay there almost as though he were asleep, and I wished he were only asleep but I knew he was dead and would never come back home with us. It was the worst singular feeling that I have ever experienced in my life. The second worst experience in my life was telling my 3 other children later that night that their older brother Brian was dead. It was heart breaking to watch Kevin, Julie, and Christie say goodbye to their big brother forever that night. Nothing can ever prepare you for such an event.

And yet from this tragedy has come guidance and hope for others not to make the same mistake. This book will take you on a personal journey through the life and death of my son. You will see through my eyes the pain and agony of losing a child, but you will also experience the love, inspiration, and hope that has resulted. By reading this book, you will learn how more lives will be touched and saved through the life and death of my son than I could ever accomplish as a neurosurgeon. This is a book that every parent and every teenager should read.

Title: The Night He Died