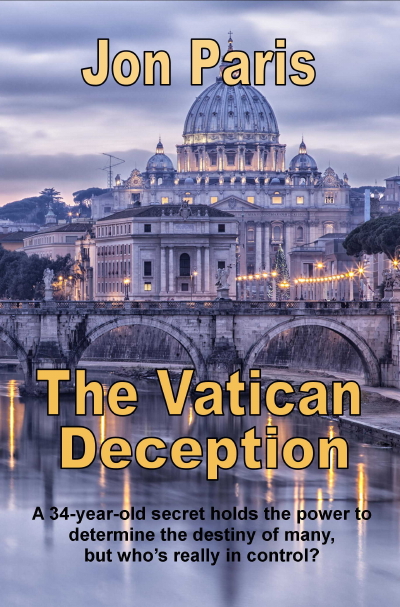 After being approached by Sofia Russo, a young and extremely fashionable Italian prosecutor, Roy Young is commandeered  from a military training consultation he is about to commence and immersed in the middle of a Vatican centered machination.  Following the death of Sofia’s mother and the revelation of a mysterious secret she held for most of her life, Roy, together with Sofia, pilot their way through the honchos of the Vatican Bank, the Jesuits, Pharmaceutical majors, and two of Italy’s most notorious Mafia groups in search of answers.

Roy and Sofia dodge capture and death more than once after coming head-to-head with Cardinal Alejandro Barros, CEO of the Vatican Bank and Monaco-based Reiner Hoffmann, Chairman of Hoffmann Enterprises, a global corporation with holdings in several mega pharmaceutical firms. The ultimate prize: monetization from stem cell clinical trials.

Roy finds out everything is not as it appears, uncovering a series of malicious, commercial arrangements materializing beneath the veneer of pioneering advancements in genetic treatment, and all somehow mysteriously linked to an iconic murder 34 years earlier.